When it comes to the affordable, single cylinder, big bore, dual sports bike class, the Husqvarna TR650 Terra has shown more potential than any previous contender. The only feature it lacks of a true adventure bike is a long-range tank that defined the classic bikes of the ‘80s and ‘90s. So when I got the call from Touratech Australia distributor and Safari Tanks CEO, Robin Box, to test their new TR650 long-range tank, I was a little excited to say the least. 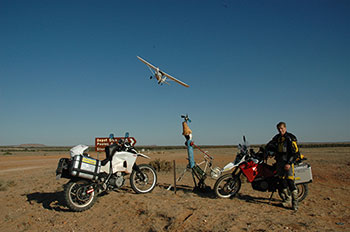 With their new tank, adopting the lines of the TR650 plastics, Safari Tanks have created a very neat package, but like all their designs they have to be proven in real world conditions, and that was the next stage of development. I was keen to be a part of their development testing and didn’t hesitate to get on board. Robin gave me a few details and hinted that his neighbors from across the district in country Victoria would be joining us.

In the following couple of weeks the Safari Tanks R&D team was hard at work creating moulds and creating two prototypes. Safari Tanks use a rotomoulding process, so even though the moulds have been produced, it’s not until the plastic tank pops out, is pressure tested and fitted, that the final product is ready to go.

The plan was to fit out two Husqvarna TR650s with two sets of tanks. For the test ride we would head for the Australian outback, but first a couple of days were spent setting the bikes up and doing a quick shakedown before setting off on our 2000 plus kilometre trip. 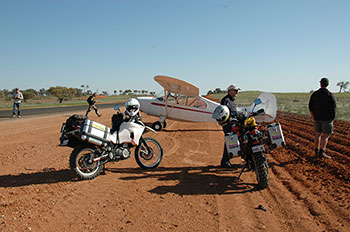 Once the bikes were set-up  and ready to roll, Robin suggested we ride over to his neighbours for a pre-ride meeting.

“So how many other bikes are coming with us?” I asked. “None, just us,” was his reply. Looking confused, I asked: “So what about the other guys?” Just as I said that, I heard the sound of a very low flying plane. “That’ll be them now”.

That was our cue to head out to meet the rest of the expedition team. While only just over the ridge, it was a 20 kilometre ride around to ‘the hanger’. It was a short two kays off the main road and after meandering through some beautiful country, we descended down a short hill to a very, very large tin shed, which turned out to be Doug’s hanger. There we met Doug, his son Mick, Smithy, and our cook, Darren.

Doug’s Landcruiser, that would serve as the aircraft’s support vehicle, was packed with spare parts and fuel cans for roadside refuelling. Robin and I would carry everything we needed on the bikes. Doug would pilot ‘Chomp’, which is a small two-seater ultra lightweight. While it looked like any other small plane , its 150 metre take-off would prove ideal for quick roadside refuels. 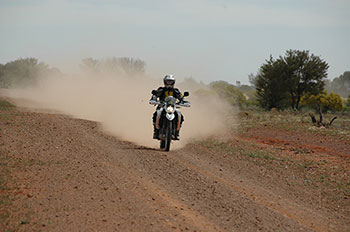 The expedition was set up to be completely self-sufficient, following the plane as the weather would dictate the direction we took. Our tentative destination was Birdsville, but that could change at anytime. Two team members in the plane, two in the support vehicle and two bikes. The idea was that we would swap seats during the trip. I was so excited I neglected to mention that I couldn’t fly a plane. However, we all had radios, so I figured I could call for instruction if I ran out of options.

We headed north from Ivanhoe up the Cobb Highway for Wilcannia. That would be our first fuel stop for the bikes, support vehicle and the plane! But before we were halfway, Robin and I came over a crest to find Chomp parked by the side of the road about half a kilometre in front of us. While we were cruising at 100km/h, Chomp sat comfortably on 130, so the boys in the plane would wait til the rest of the crew caught up. As soon as we arrived the support team swung into action, refuelling the plane while our cook, Darren, passed around home made cookies.

Our stay in Wilcannia was just long enough to refuel and we headed to White Cliffs for lunch. By now things were getting a little steamy and Robin and I began to realise that riding the bikes was the toughest gig on this trip. From White Cliffs we headed across the rocky open plains and were pretty relieved when we made the Silver City Highway, where the conditions improved. Then north to Tibooburra, with a quick diversion to the historic town of Milparinka, where we found Chomp parked next to the old pub. 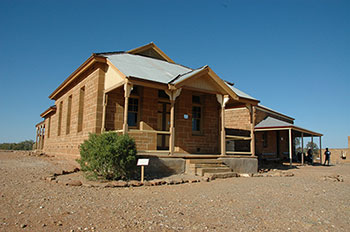 As the light faded Chomp flew ahead to find a campsite, while we headed to Tibooburra so Robin could investigate a fuel leak, which turned out to be a dodgy rubber gasket. When it comes to solving problems, the only difference being Robin and MacGyver is a mullet hair cut! We decided not to top up my bike and run it dry the following day. I just had to make sure the support vehicle stayed behind the group.

This was the point where we learned our first important life lesson. Doug and Mick found a campsite north of Tibooburra, just five kays north out of town. What nobody realised is that in a plane everything looks smaller, so therefore not as far.

Nevertheless they were 15km out of town to a turn off, then another 5km into the Sturt National Park.  By the time we found each other it was almost dark and Robin and I focused on not getting taken out by kangaroos that were out looking for water. Luckily Darren’s cooking made everything okay.

The following morning we pushed north to the border where we met Doug with the plane, parked by the road. The day was quickly warming up and while I wasn’t looking, Robin handed the keys of his Terra to Darren, threw his riding gear in the Landcruiser, climbed in the plane and took off with Doug, with this pie eating grin on his face. 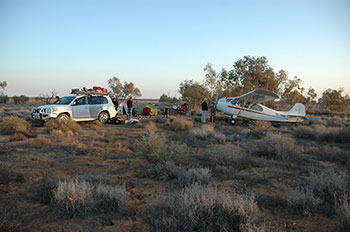 We turned off for Santos and Epsilon and as we got closer to Innaminka gas wells dotted the landscape. With only 30 kilometres to go, my Terra suddenly ran dry at 672km. Not bad in these conditions, and with a quick top up we soon arrived in Innaminka.

Doug parked Chomp at the local airstrip and we topped up both bikes and Landcruiser. The queues at the Innaminka pumps gave us a bit of an indication on what the crowds would be like at Birdsville, not to mention air traffic, so while Darren wasn’t listening the decision was made to head east and avoid the pre-Birdsville Races crowd. While we were fuelling up, the Terras were getting plenty of looks with the new Safari Tanks. They really do look the part for outback adventure touring.

It had been a long day the day before and we decided that the famous Burke & Wills Dig Tree would be our next stop. While having lunch down by Cooper Creek, a local turned up and asked the usual questions: “where ya from, whatcha doin’, where ya going?” Once we told him that we were on our way to the Dig Tree, he suggested we go the scenic backroad. 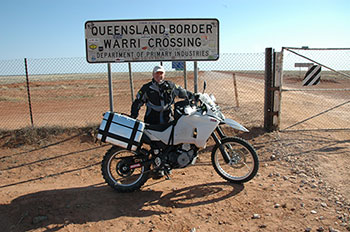 Taking his advice we found that he failed to mention the massive tube splitting, rim flattening rocks that lurked in hidden creek beds. The sort of creek bed that you launch into at about 100km/h from relatively smooth roads. As I changed my front tube by the side of the road, with no shade in sight, I could only imagine Robin’s grin as he looked down from his cruising altitude.

Our Dig Tree campsite had water views and it was the first chance to wash off the dust from the previous couple of days. Robin, obviously feeling refreshed from his day of backseat flying, faced off with a local pelican until Darren han dinner on the table. This was the life.

The following morning I graciously surrendered my ride and took my place in Chomp’s tiny cabin. While the ultralight craft looked even more fragile from the inside, I’d learnt by now that Doug was a very experienced pilot and I couldn’t wait to get into the air. Chomp has controls in both the front and back seat, so there was an opportunity for passengers to have a go. 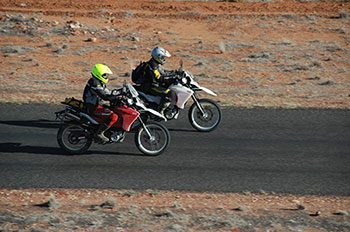 The first thing I learned though, is that you don’t grip your SLR camera between your legs, as it also grips the control stick. As the stick suddenly flapped violently between my legs, Doug was trying to work out what the hell was happening. Realising what I was doing, I opened my legs like I was about to give birth and everything was okay again. Sorry about that Doug.

The road to Thargominda was pretty uneventful, but the view was spectacular. At our lunch stop Mick was looking a little green around the gills after struggling with man flu. We swapped seats as Smitty took a turn in the plane, Darren jumped on a bike and I took up driving duties in the Landcruiser, while Mick recuperated. Whilst there was some confusion with air support navigation, we eventually made it to Hungerford.

While the local Hungerford publican was keen to have us stay, the local police officer led us out to a remote camping spot, which we nicknamed ‘Wolf Creek’, for reasons that will be left untold. Nevertheless, it was an awesome spot, albeit a bit dusty. 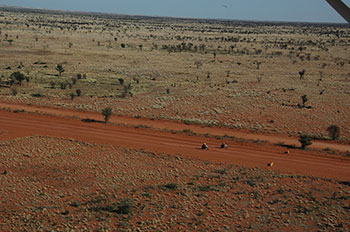 It was my turn in the plane again as we headed south back into New South Wales. We’d thought about pushing through to Wapaaring the day before, but after flying over we’d definitely made the right choice. The ride, or should I say the flight, to Wilcannia was pretty uneventful, except when Doug would suddenly spot a massive eagle, bank sharply and chase after it so I could get a photo. Unfortunately it’s a bit hard to get a shot when you’re in a 3G turn with your face pressed up against the side window waiting for the wings to snap off!

Our convoy picked us up from Wilcannia airstrip. I climbed on the back of Robin’s Terra and we motored into town. As we came around the corner to the local servo there was at least 200 Rebels motorcycle gang members. Naturally, we drove straight past and around the block. We headed for the local park where other residents had also found refuge. 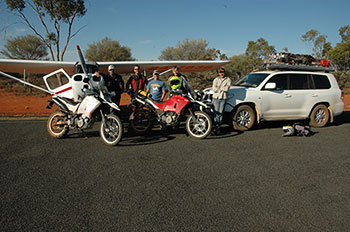 The good news was that we discovered that Wilcannia actually has a couple of nice little cafés, so it was pies, pasties and lattes all round. We did, however, still have to get fuel and the Rebels just kept rolling in, shadowed by marked and unmark police cars. We managed to fuel up eventually.

We headed straight back down the highway to Ivanhoe where we returned to our original camp site for our last night of cold washes and persistent flies. What I learned is that an adventure ride doesn’t have to be a flat-out, record breaking, bike-breaking race from Point A to Point B.

We never knew where we’d end up the next day, and the true value of a great adventure is good company and good fun.